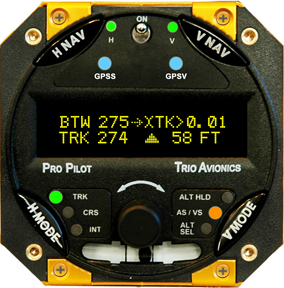 The STC Group, LLC, announced that it has received an STC for the installation kit for the non-TSO’d Trio Pro Pilot digital autopilot into dozens of Cessna 172 and 182 models, with more models to follow soon. The full-featured autopilot promises to bring a robust set of features to the legacy fleet at a price that many thought would be impossible just a year ago.

“Cooperation from the FAA and support from industry organizations such as AOPA and EAA has propelled this project at speeds most people never anticipated,” said STC Group Founder and CEO Paul Odum. “We received the STC in only five months and expect to have Parts Manufacturing Authority in time to deliver the autopilot itself at EAA AirVenture this summer.”

Odum started on the project to certify the experimental autopilot after becoming frustrated with efforts to install a traditional aftermarket autopilot in his 1975 Cessna 182P. While typical analog autopilots were expensive to buy and install and not very sophisticated, Odum sought the capabilities and price points he had seen safely used in experimental airplanes. To make that leap, he linked up with a team of engineers with experience at Cessna and Northrup as well as other aviation professionals to form the STC Group, a virtual company.

“Trio’s Pro Pilot autopilot has a proven record of reliability in the experimental and warbird fleets,” said Odum. “As such, it is an excellent off-the-shelf choice to retrofit into the legacy GA fleet based on its record of safety and reliability,” he added. The company’s STC covers most variants of the Cessna 172 and 182 from the earliest models through the 2006 models. STCs for additional makes and models will be developed soon.

Trio was established in 2000 and has delivered some 3,000 autopilots around the world. The two-axis Pro Pilot model utilizes roll and auto-trim pitch servos to provide precise horizontal and vertical navigation capabilities. Altitude control includes climb and descent functions with altitude pre-select. Vertical navigation can be flown at pilot-selected speeds.

When connected to a WAAS-enabled GPS, Pro Pilot can fly the lateral and vertical portions of RNAV approaches and other procedures. The ability to fly localizer, backcourse, and glideslope will be added in coming months. The digital autopilot also provides flight envelope protection, nudging the flight controls away from an overspeed or stall situation.

An “automatic 180-degree turn” feature can guide VFR pilots out of inadvertent weather encounters – a feature that has been credited with saving lives in experimental aircraft. Chuck Busch, Trio Avionics president and designer of the Pro Pilot, said, “As experimental aircraft builders, our primary design goal has always been safety of flight. We are especially proud that our Pro Pilot incorporates many safety features that are unique in the industry.”

According to Odum, the STC Group’s efforts have benefited from the FAA’s willingness to reconsider its traditional certification methods. Rather than a one-size-fits-all approach to certification, the FAA is taking a risk-based approach to approving such projects – a move that will benefit many companies going forward, The STC Group is a participant in an FAA test program to evaluate a risk-based PMA process.

“We are grateful for the FAA’s willingness to take a practical approach to such approvals,” said Odum. “The change will lead to our ability to improve the safety of the legacy fleet through better, more capable autopilots and it will open the door for others to take advantage of this new process for all sorts of innovative gear and equipment.”

The STC Group is selling the Pro Pilot installation kits, including the STC and drawings, for $2,000. The autopilot itself, including PMA and documentation, will be available this summer for about $5,000. The addition of the LOC/BC/GS module (available later) will be less than $500.

For more information about the Trio STC project, please contact Paul Odum at 805-304-5246 or email paul.odum@sbcglobal.net.