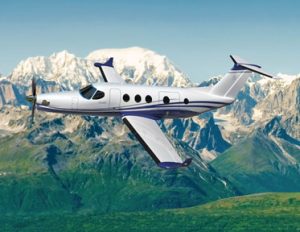 WICHITA, Kan. – Textron Aviation Inc., a Textron Inc. (NYSE:TXT) company, announced the status of development on its new high-performance Cessna Denali single-engine turboprop, as the program begins fabrication of the first test articles. The clean-sheet Denali will incorporate the latest technology and is being designed to outperform its competition in capability, pilot interface, cabin experience and ownership costs. Powered by GE’s advanced turboprop engine, the Denali will offer single-lever power and propeller control to ease pilot workload, a feature currently not offered in this class of aircraft.

Since the Denali was unveiled at Oshkosh last summer, program engineers have started fabrication of the first static and fatigue test articles and initiated testing with the fuel system iron bird test article.

“This is an exciting time in the Denali program as this aircraft is now coming to life through the production of the first test articles,” said Brad Thress, senior vice president, Engineering. “The level of attention that goes into this phase of development results in a highly mature product in later stages of the development program, ultimately allowing us to deliver customers a best-in-class aircraft.”

About the Denali – Engineered to achieve cruise speeds of 285 knots and full fuel payload of 1,100 pounds, the Denali will have a range of 1,600 nautical miles at high-speed cruise with one pilot and four passengers and will be able to fly from Los Angeles to Chicago, New York to Miami or London to Moscow.

The Denali will be powered by GE’s new advanced turboprop engine. The FADEC-equipped, 1,240 shaft horse power (SHP)-rated turboprop engine will ease pilot workload with its single-lever power and propeller control. The airplane will be equipped with McCauley’s new 105-inch diameter composite, 5-blade, constant speed propeller, which is full feathering with reversible pitch and ice protection. The engine is designed to provide an initial 4,000-hour time between overhaul and offer class-leading performance retention for an outstanding hot/high capability.

The Denali will feature the Garmin G3000 intuitive touchscreen avionics suite and will include high-resolution multifunction displays and split-screen capability. The G3000 flight deck will include weather radar, advanced Terrain Awareness Warning Systems (TAWS), and automatic dependent surveillance-broadcast (ADS-B) capabilities, which will make it compliant with a significant aspect of future Next-Generation air traffic control requirements.

The Denali’s flat floor cabin is designed to be the largest in its segment and will offer the versatility to easily convert between passenger and cargo configurations. The Denali’s cabin will feature an executive seating configuration of six individual reclining seats, club-configuration tables and refreshment unit or a commuter style seating layout with nine individual forward facing seats. The aircraft will boast a digital pressurization system maintaining a 6,130-foot cabin altitude at a service ceiling of 31,000 feet.

First in this class of aircraft, the Denali will offer customers an optional externally serviceable belted lavatory with pocket door enclosure that is located in the back of the cabin. Denali customers will also enjoy the large cabin windows, interior LED lighting, a forward refreshment cabinet and an in-flight accessible baggage compartment.