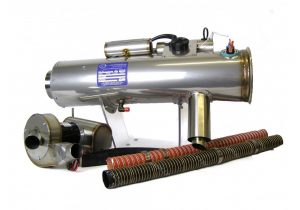 Janitrol Aero heaters will not be affected by the FAA’s proposed AD on South Wind aircraft cabin combustion heating systems which is estimated to impact over 4,000 Cessna 300- and 400-series piston twins.

Montgomery, AL, (January 31, 2017) – Mike Disbrow, president of Hartzell Engine Technologies (HET), announced that as a result of its asset purchase of C&D Associates in 2016, the company is now producing a line of South Wind replacement heaters under the Janitrol Aero brand.

The NPRM containing a draft of the current AD is available at: http://bit.ly/SouthWind-AD.

“As written in the NPRM, along with some other inspections and tests, the AD will require a Pressure Decay Test (PDT) on the South Wind heater’s combustion tube. For the tube to pass, it cannot have any leaks,” Disbrow explained. “The FAA estimates that 90-percent of these heaters will fail the PDT. And, according to the AD, any tubes that fail must be replaced. The AD does not allow for any repairs.”

“Should the owner/operator decide to replace the South Wind combustion tube, the AD also mandates that they repeat the compliance testing every 250 hours of heater time or every two (2) years, whichever comes first,” he said.

Disbrow said that while the test is not difficult, there are only a limited number of aircraft maintenance facilities that are experienced and equipped to perform the required testing and compliance procedures. Another challenge facing shops with regards to the PDT is that it is also more difficult to conduct on-wing than on a bench.

“The FAA estimates that there are over 6,300 aircraft affected by this AD – we think that over 4,000 of those will be the affected 300- and 400-series twin Cessnas in the fleet,” Disbrow said. “Even if some operators choose to disable their cabin heater, there are still thousands of piston singles and twins that will need to comply.”

“If an owner/operator waits until the AD is issued and they fly-off the allotted 10 hours of heater operation time, there just won’t be enough capacity at all the heater shops to handle the deluge of South Wind systems needing testing and repairs,” he said. “That will leave thousands of owner/operators likely facing next winter without cabin heat.”

“By the time you factor in the cost of the South Wind heater AD testing and replacing the combustion tube and the periodic compliance testing, you are pretty much on par with the cost of our PMA’d Janitrol Aero replacement heaters,” he said. “And any licensed maintenance facility can change out the heaters, which will save the owner/operator a lot of added aircraft downtime.”

Janitrol Aero replacement heaters can be purchased directly from HET or through one of its authorized distributors. Contact information can be found at: www.Hartzell.aero/contact/.