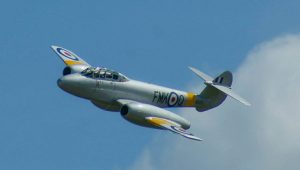 EAA AVIATION CENTER, OSHKOSH, Wisconsin — (December 14, 2017) — Some of the oldest jet aircraft in existence will be flying over the flightline at EAA AirVenture Oshkosh 2018 as the world’s largest fly-in convention brings together a rarely-seen gathering of these early jets.

The 66th annual Experimental Aircraft Association fly-in convention is July 23-29 at Wittman Regional Airport in Oshkosh, Wisconsin. The event annually welcomes more than 10,000 airplanes and 500,000 people from 80 nations to celebrate the history and future of flight.

Among the airplanes expected to participate is a rare British Meteor, currently the oldest flying original jet in existence, which will arrive from the United Kingdom. British Venom and Vampire jets will be part of the gathering, as will American designs such as the T-33 “Shooting Star” and F-86 “Sabre,” as well as a Soviet-era MiG-17. 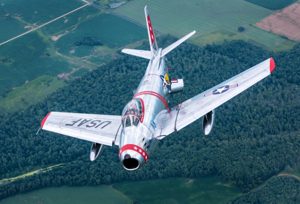 “Classic jets have been part of the EAA AirVenture warbirds lineup for a number of years, but to include rare British aircraft such as the Meteor, Venom and Vampire makes the 2018 gathering even more special,” said Rick Larsen, EAA’s vice president of communities and member programs who coordinates AirVenture features and attractions. “Many people have never seen some of these jets fly in-person, which is why bringing these airplanes together is another reason EAA AirVenture 2018 is a can’t-miss event for aviation fans.”

“Oshkosh is known as the place where everything that flies is welcome and is appreciated by attendees, so to bring these rare jets to the AirVenture flightline is among the highlights of our odyssey to save, restore, and fly these magnificent airplanes.” said Marty Tibbitts, President of the World Heritage Air Museum of Detroit, Michigan, which is bringing the British jets to Oshkosh in 2018. The museum’s mission is to rescue military jet aircraft from the 1950s, ’60s, and ’70s.

Other early jet aircraft will be coming from members of the Classic Jet Aircraft Association as well as private owners throughout North America. These enthusiasts are encouraging all owners of vintage jet aircraft to fly to Oshkosh in 2018 to make this reunion one of the largest ones even undertaken.

“The opportunity to be a part of the air shows and programming at Oshkosh is one that all classic jet owners should attend,” said Zach McNeill, Classic Jet Aircraft Association president. “These airplanes have unique histories and so many individual stories. The best place to share them is at Oshkosh, where worldwide aviation fans are eager to hear and appreciate more about these airplanes.”

The F-86 and T-33 aircraft communities are also urging their members to bring their aircraft to AirVenture, where they will participate in the daily air shows, displays on the Boeing Plaza main showcase ramp, and up-close presentations as part of the Warbirds in Review program. Complete details, including air show participation, will be released as they are finalized.

“We’re looking to create a reunion of these legendary jets at Oshkosh that is rarely seen by the public,” said Paul Keppeler, who owns and flies both a T-33 and F-86 jet aircraft. “There is something about being part of the Oshkosh experience that creates unforgettable moments, and we want as many of these jets as possible to be there this coming summer.”