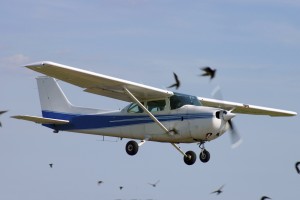 Wildlife strike reporting for both commercial and general aviation airports continues to increase, according to a new report by renowned wildlife expert Dr. Richard A. Dolbeer. At the request of the Federal Aviation Administration (FAA), Dolbeer recently published the wildlife report, which shows that 47 percent of the wildlife strikes that occurred from 2009 to 2013 were reported to the FAA’s National Wildlife Strike Database. That number is up from 42 percent for the previous reporting period of 2004 to 2008.

The report concludes that the FAA’s proactive continuing outreach actions with its aviation industry and government partners have improved the quantity and quality of voluntary wildlife strike reporting. The report also highlights a decrease in the number of damaging strikes, greater reporting of birds of all sizes, and the decrease of damaging strikes within the airport environment. Other findings note a decrease in the average bird size involved in strikes, and an increase in the number of reports that identify the bird species.

The report concludes that the level of reporting is adequate to track national trends in wildlife strikes, so mandatory reporting is not necessary at this time. It also provides a scientific basis for the FAA to develop policies and guidance to mitigate wildlife strikes; and the reporting process complies with International Civil Aviation Organization standards.

Wildlife-aircraft strikes have resulted in the loss of hundreds of lives worldwide, as well as billions of dollars in aircraft damage. The FAA maintains a comprehensive program to address wildlife hazards. For more information, including how to report wildlife strikes, visit http://www.faa.gov/airports/airport_safety/wildlife/.