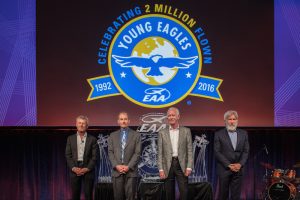 What started in 1992 as a program to introduce kids to flight has evolved 25 years later into an aviation movement powered by the world’s largest volunteer air force. The Experimental Aircraft Association (EAA) Young Eagles program is celebrating its 25th anniversary in 2017, a milestone year that began with the flight of the 2 millionth Young Eagle by former Young Eagles Chairman (2004-2009) and celebrated actor Harrison Ford at EAA AirVenture Oshkosh in July.

Ford, who served as volunteer chairman from 2004-2009 and has flown more than 300 young people himself, returned to Oshkosh to fly 16-year-old Jodie Gawthrop as Young Eagle No. 2,000,000. That flight came 13 years after the program reached its initial goal of flying 1 million young people by the 100th anniversary of powered flight in December 2003.

“The success of Young Eagles is based on its simplicity – one pilot flying one young person, free of charge, to introduce them to flight,” said Jack J. Pelton, EAA CEO and Chairman. “The program has been built on the dedication of more than 50,000 pilots who have flown at least one Young Eagle over the past quarter-century – some flying more than 5,000 kids – with the help of another 50,000 ground volunteers who have dedicated their time and talents.”

With a growing need for pilots, EAA Young Eagles is more important than ever before. In the years since EAA founded it, Young Eagles has emerged as aviation’s leading initiative to introduce kids to the possibilities of flight. Thousands of Young Eagles have gone on to pursue careers in aviation and countless more have benefited by the boundary-challenging experience.

“While we just flew our 2 millionth Young Eagle in July, we really mark the beginning of the next million Young Eagle flights,” said Sean D. Tucker, Young Eagles Chairman and Aerobatic Pilot. “Aviation has brought so much to so many and touched so many lives. Our incredible EAA pilots and volunteers who fly these kids are passionate about providing the same opportunities they had in aviation to the next generation. Reaching 2 million kids flown in 25 years is a remarkable achievement, and we’re going to celebrate that in 2017!”

Specific activities celebrating Young Eagles’ 25th anniversary in 2017 will be announced as they are finalized. They will involve EAA members and chapters throughout the country, as well as ways for pilots and other volunteers to get involved. The 25th anniversary will reach its peak during EAA AirVenture Oshkosh 2017, July 24-30 in Oshkosh, Wisconsin.

Heading into the program’s 25th anniversary year, Young Eagles flights have been flown by EAA-member pilots in aircraft ranging from hot air balloons to corporate jets, and on every continent except Antarctica. The program has also brought aviation to youth in all socio-economic groups, including Native American tribes in the southwestern U.S. and inner city youth through an association with the famed Tuskegee Airmen of World War II.

Over its history, the Young Eagles program has drawn high-visibility personalities as chairmen. Along with Ford, EAA Young Eagles has been chaired by the late Academy Award-winning actor Cliff Robertson (1992-1994); Gen Chuck Yeager (1994-2003), the first man to fly faster than the speed of sound; Chesley “Sully” Sullenberger and Jeff Skiles (2009-2013), the cockpit crew of the “Miracle on the Hudson” USAir Flight 1549; and current chairman, aviator and air show performer Sean D. Tucker, who flies a Young Eagle at each air show tour stop.

About EAA Young Eagles – Young Eagles invites young people ages 8-17 to experience aviation through a demonstration flight conducted by EAA-member volunteer pilots. Since 1992, more than 2 million young people have been flown by more than 50,000 aviators, becoming the largest youth aviation education program ever created. More information is available at www.eaa.org/youngeagles.

About EAA – EAA embodies the spirit of aviation through the world’s most engaged community of aviation enthusiasts. EAA’s 195,000 members and 1,000 local chapters enjoy the fun and camaraderie of sharing their passion for flying, building and restoring recreational aircraft. For more information on EAA and its programs, call 800-JOIN-EAA (800-564-6322) or go to www.eaa.org. For continual news updates, connect with www.twitter.com/EAA.

A New Carbon Monoxide Monitor Made for the Cockpit