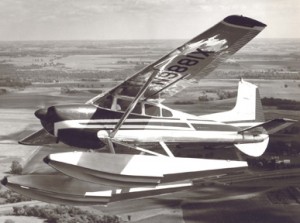 South Saint Paul, MM – January 11, 2016 – Following a hugely successful introduction, Wipaire is pleased to announce the return of the Ben Wiplinger Memorial Seaplane Rating Scholarship. The scholarship was established in 2015 in celebration of Wipaire’s 55th anniversary and Ben Wiplinger’s contributions to aviation. Applications will be accepted through May 31st, 2016.

“The response to the scholarship last year was beyond our expectations,” said Chuck Wiplinger, President and COO of Wipaire, Inc. “We’re excited to bring the scholarship back for 2016. It’s a way for us to give back to our industry, to invest in the growth of the seaplane community, and to honor my grandfather and his vision.”

Ben Wiplinger, founder of Wipline, Inc., began his aviation career by building a Pietenpol Air Camper. He worked as a machinist, auto body technician, and aircraft mechanic before later serving in the Army Air Forces as a mechanic. After the war, Ben returned home to South St. Paul and began converting ex-military aircraft into executive and corporate aircraft with his business, Wiplinger Aircraft Service.

Ben purchased his first seaplane in 1951 and wanted to become a dealer for EDO, then the largest float manufacturer in the world. Ben’s application was not approved, so he sold Wiplinger Aircraft Service and set out to build his own floats, establishing Wipline, Inc. in 1960. Many of the features Ben incorporated in the first set of Wipline floats remain standard today.

Ben passed away in 1992. He left the company, now known as Wipaire, to his son Bob, who today serves as the Chief Executive Officer. Ben’s grandson Chuck now works alongside Bob as President and Chief Operating Officer of Wipaire. Ben’s contributions to aviation were recognized in 1999 when he was inducted into the Minnesota Aviation Hall of Fame, and his legacy continues to impact pilots and aircraft owners today.

The scholarship is valued at $1,500 and will be paid directly to the winner’s designated flight school. Applicants must hold a sport pilot license or higher, and must submit the application form and a 500-word essay that includes why the applicant would like to learn to fly seaplanes, and how the scholarship will help in career or aviation industry aspirations. Applicants must also submit a copy of pilot certificate, and copy of current medical (if applicable), and must be a legal resident of the United States or Canada, excluding the province of Quebec.

The application form may be downloaded at www.wipaire.com/scholarship and will also be available at Wipaire displays at trade shows. Due to the number of applications received, applications will not be returned or acknowledged. Entries must be received by May 31st, 2016.

About Wipaire, Inc. – For over 50 years, Wipaire has been engineering and manufacturing a full line of aircraft floats for all sizes of aircraft from the Piper Cub to the Viking Twin Otter, including most single engine Cessna aircraft. In addition, Wipaire has engineered over 100 Supplemental Type Certificated modifications for improved performance, convenience, and reliability. As a leading aircraft service provider, Wipaire offers maintenance, avionics installation and repair, custom interior design and installation, and exterior paint refinishing all in one convenient location. Wipaire is recognized for its quality products and engineering expertise worldwide.