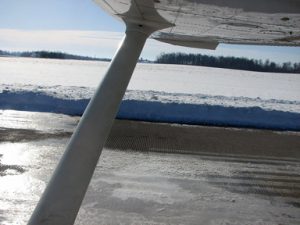 To that end, the Federal Aviation Administration (FAA) has launched a TALPA website (http://www.faa.gov/about/initiatives/talpa/) with key information the aviation community needs to know to prepare for the TALPA changes, which went into effect October 1.

The site offers FAA guidance, notices, alerts, videos, and frequently asked questions to help the aviation community reduce the risk of runway overrun accidents and incidents due to runway contamination caused by weather and other factors.

The FAA developed the standards based on the work of the TALPA Aviation Rulemaking Committee (ARC). As a result of the committee’s work, the FAA has developed a revised method for airports and air traffic controllers to communicate actual runway conditions to the pilots in terms that directly relate to the way a particular aircraft is expected to perform. The TALPA initiative improves the way the aviation community assesses runway conditions, based on contaminant type and depth, which provides an aircraft operator with effective information to anticipate airplane braking performance.

The pilot or dispatcher will then consult the aircraft manufacturer data to determine what type of stopping performance to expect from the specific airplane they are operating.

The airport operator will assess surfaces, report contaminants that are present, and input the information into the Federal NOTAM System in order to generate the numerical Runway Condition Codes (RwyCC) based on the RCAM. The RwyCCs may vary for each third of the runway if different contaminants are present. However, the same RwyCC may be applied when a uniform coverage of contaminants exists. RwyCCs will replace Mu values, which will no longer be published in the Federal NOTAM System.

Pilot braking action reports will continue to be used to assess braking performance. Beginning October 1, the terminology “Fair” will be replaced by “Medium.” It will no longer be acceptable for an airport to report a NIL (none) braking action condition. NIL conditions on any surface require the closure of that surface. These surfaces will not be opened until the airport operator is satisfied that the NIL braking condition no longer exists.