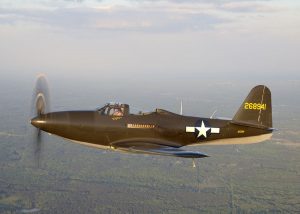 A newly restored Bell P-63 Kingcobra will join “Warbirds in Review” at the Experimental Aircraft Association (EAA)  AirVenture 2017 in Oshkosh, Wis., July 24-30, 2017. The aircraft spent 16 years in restoration before flying again this spring at Atlanta Regional Airport – Falcon Field in Peachtree City, Ga. The P-63, restored and operated by the Dixie Wing of the Commemorative Air Force (CAF), served many roles, from test aircraft to air show performer.

Former astronaut and retired Gen. Joe Engle, who was associated with the National Aeronautics and Space Administration (NASA) from the X-15 to Apollo through the Shuttle, will be a guest speaker to share the history of the P-63 and NASA on Saturday, July 29 at 1:00pm. He is the only person to have flown two different types of winged vehicles in space: the X-15 and the Space Shuttle. He also is the only astronaut to manually fly the Shuttle through reentry and landing.

This P-63 served as a Bell test aircraft until January 1945, when it was transferred to the National Advisory Committee for Aeronautics (NACA), the forerunner of today’s NASA. The aircraft operated at Moffett Field on the grounds of the NACA Ames Research Center in Mountain View, Calif. It was built in the winter of 1944, bearing the Bell construction number 33-11(model 33, aircraft 11). It rolled out of the Bell plant in Niagara Falls, N.Y., on Feb. 24, 1944, where it was formally accepted by the United States Army Air Force as a P-63A-6 and given serial number 42-68941.

“This P-63 was used by NACA for early flight testing, and we plan to unveil in Oshkosh the special markings the airplane carried in 1945 when based at Moffett Field,” said Mo Aguiari, Marketing Director for the Dixie Wing. “For this year’s Warbirds in Review, we have asked NASA to send a T-38 Talon as part of the program. The T-38 is used by NASA to train astronauts, which symbolizes the historic link between NACA and NASA.”

“Having the T-38 as part of this program completes the circle to tell the history of NASA,” said Connie Bowlin, President of EAA Warbirds of America, “because this Bell P-63, restored by the Dixie Wing of the CAF, was actually operated by NACA.”.

About the CAF Dixie Wing Warbird Museum – The CAF Dixie Wing, based in Peachtree City, GA., was founded in 1987. The Wing, one of the largest units of the Commemorative Air Force, maintains and flies seven WWII aircraft including a P-51 Mustang, an FG-1D Corsair and rare types such as the SBD Dauntless dive bomber and P-63A Kingcobra. The Dixie Wing organizes two large events a year – WWII Heritage Days and the Atlanta Warbird Weekend. The unit, composed of 300 volunteers, is a non-profit, tax-exempt organization that relies on contributions of time and funds to carry out the mission of the CAF. For more information, go to www.dixiewing.org.