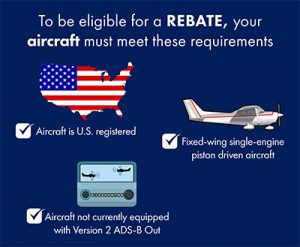 On June 6, 2016, U.S. Transportation Secretary Anthony Foxx and Deputy Administrator Michael G. Whitaker announced a $500 rebate incentive for General Aviation (GA) aircraft owners who equip their aircraft with required avionics technology. Accelerating compliance is critical to ensuring that pilots, manufacturers, and retail facilities have adequate time and capacity to equip aircraft in a timely and efficient manner, ahead of a 2020 regulatory deadline.

Automatic Dependent Surveillance-Broadcast (ADS-B) is a foundational element of the FAA’s NextGen program, which consists of a suite of technologies that are modernizing the nation’s air traffic control system. ADS-B transforms aircraft surveillance using satellite-based positioning.

“This announcement signals our commitment to NextGen, which has played an important role in ensuring that our airspace is safe and efficient for the American people,” said Secretary Foxx. “We are focused on achieving its full potential, and by working with our General Aviation community, I’m confident we can successfully integrate aircraft and technology into the national airspace system.”

The rebates will be available this fall, and the FAA will announce the specific date soon. In the meantime, the FAA has published information regarding the goals and structure of the program, and is encouraging aircraft owners to look at the available equipment on the market and to schedule an installation appointment with a qualified installer starting in the fall of 2016. Aircraft owners will only qualify for the rebate if the installation is scheduled after the FAA begins offering the rebates.

The FAA published a final rule in May 2010 mandating that aircraft flying in certain controlled airspace be equipped with ADS-B by Jan. 1, 2020. That airspace is generally the same busy airspace where transponders are required. Aircraft that fly only in uncontrolled airspace where no transponders are required, and aircraft without electrical systems, such as balloons and gliders, are exempt from the mandate.

“We’re calling on all aircraft owners who plan to fly in busy airspace to equip with ADS-B before the deadline,” said Administrator Huerta. “Owners who wait too long to equip may not be able to get an installation appointment before the deadline,” he continued. “This limited-time rebate provides an incentive for early retrofitting, and will help draw attention for the urgent need for owners to comply so that they can continue to fly their aircraft in 2020.”

The $500 rebate will help offset an owner’s cost to equip U.S.-registered, fixed-wing, single-engine piston aircraft with avionics that comply with FAA technical standard orders and meet the rule requirements. The FAA is not offering rebates for software upgrades for aircraft already equipped, for new aircraft, or for aircraft for which the FAA already has paid or committed to upgrade. The FAA will be able to distribute 20,000 rebates – one rebate per aircraft owner.

The FAA is encouraging owners of fixed-wing, single-engine piston aircraft to apply as soon as the program is launched this fall because the rebates are available on a first-come, first-served basis for one year, or until all 20,000 rebates are claimed, whichever comes first. The FAA estimates that as many as 160,000 aircraft need to be equipped by the deadline.

“ADS-B provides the General Aviation community with increased safety, efficiency, and situational awareness,” said Whitaker. “We’re getting closer to the 2020 deadline, and we need 100 percent equipage in the required airspace to realize the full benefits of this NextGen technology.”

General aviation and air taxi aircraft equipped with ADS-B Out enjoy more efficient spacing and optimal routing in some non-radar environments, including busy airspace in the Gulf of Mexico, mountainous regions of Colorado, and some areas in Alaska. ADS-B improves life-saving search-and-rescue with accurate and timely last-reported positions. General aviation pilots may also benefit from air traffic control services outside radar coverage.

More information about equipping and the rebate program is available on the FAA website.