Garmin Celebrates a Milestone in Aviation 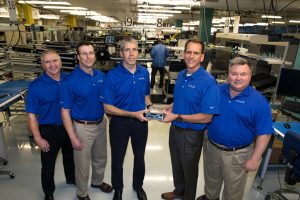 On November 22, 2017, Garmin International, Inc. a unit of Garmin Ltd. (NASDAQ: GRMN), celebrated the delivery of the one-millionth certified avionics product from its manufacturing facility in Olathe, Kansas. The milestone product was a GTX™ 3000 DO-260B compliant Mode S Extended Squitter (ES) transponder, which enables ADS-B Out transmissions and features TCAS II/ACAS II compatibility for a wide range of business and transport category aircraft.

“Since our inception over 28 years ago, Garmin has been committed to providing superior products that are known for their innovation, reliability and intuitive design,” said Phil Straub, Garmin executive vice president, managing director of aviation. “This milestone is a testament to our long-established commitment to making significant investments in research and development, as well as the hard work and dedication of thousands of passionate Garmin team members that I have the pleasure of working with every day.”

“As we celebrate this exciting accomplishment, I am very proud of how our teams have managed such significant growth while maintaining the culture of our company as our founders set forth,” said Carl Wolf, vice president of aviation marketing and sales. “The breadth and depth of our certified aviation product line has expanded greatly over the years, allowing us to develop new markets for Garmin. This incredible milestone doesn’t even include the hundreds of thousands of portable and other non-certified products that our customers use every day. On behalf of Garmin, I wish to express my utmost gratitude to our loyal customers, our dealers and the aircraft manufacturers all around the globe who have helped us to accomplish such a tremendous achievement in Garmin’s history.”

In conjunction with innovative advancements made in general aviation, Garmin continues to broaden its pioneering vision into the Part 25 business and transport aircraft market. Garmin boasts a number of retrofit installation approvals in a variety of aircraft that span from the King Air series to the Beechjet 400A/Hawker 400XP. Forward-fit products such as the milestone GTX 3000 provide operators with a transponder-based product that is flexible enough to interface with the G5000 integrated flight deck on the Citation Longitude or provide a path to continued ADS-B compliance for legacy aircraft such as an ATR 42/72, a DC-9 or Falcon 900.

Established by co-founders Gary Burrell and Dr. Min Kao in 1989 in Lenexa, Kansas, Garmin was founded with its core roots in aviation. Today, Garmin has grown to comprise of five business segments and over 11,000 employees around the globe. From a single product, the evolution of Garmin avionics solutions has grown to serve multiple segments within the aviation industry, including general aviation, business aviation, helicopter, experimental amateur-built (EAB), defense and air transport.

The success of the aviation business segment within Garmin has been built through numerous achievements over the last 28 years including:

Through a series of strategic acquisitions and satellite facilities around the globe, including that of Garmin AT in Salem, Oregon (formerly known as UPS Aviation Technologies, Inc.) in 2003, Garmin has been able to achieve greater levels of product innovation while providing a higher level of service to its aviation customer base. The recent completion of a $14 million and 66,000 square foot expansion at the Garmin AT facility is representative of that commitment. That dedication persists as Garmin embarks on a $200 million expansion at its Olathe, Kansas campus. Encompassing two phases, construction is already underway for the first phase that includes an approximately 720,000 square foot manufacturing and distribution center that will significantly expand the company’s aviation business segment. This expansion is expected to be completed in late 2020 and will provide the capacity needed to serve aviation customers well into the future.

Garmin’s aviation business segment is a leading provider of solutions to OEM, aftermarket, military and government customers. Garmin’s portfolio includes navigation, communication, flight control, hazard avoidance, an expansive suite of ADS-B solutions and other products and services that are known for innovation, reliability, and value. For more information about Garmin’s full line of avionics, go to www.garmin.com/aviation.

For more information, visit Garmin’s virtual pressroom at garmin.com/newsroom, contact the Media Relations department at 913-397-8200, or follow us at facebook.com/garmin, twitter.com/garmin, or youtube.com/garmin.