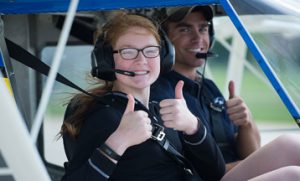 EAA AVIATION CENTER, OSHKOSH, Wisconsin — (March 13, 2018) — A milestone was reached by the Experimental Aircraft Association on March 8, as 50,000 Young Eagles have now taken the next step in their aviation journeys by enrolling in Sporty’s Learn to Fly Course after their EAA Young Eagles flights.

“More than 2 million young people have been introduced to airplanes and aviation through Young Eagles and 50,000 of them have enrolled in Sporty’s Learn to Fly course to pursue their aviation dream,” said Michael Wolf, EAA Lifetime 460022, President and CEO of Sporty’s. “The fantastic metrics speak to the success of Young Eagles and its impact on the general aviation community.”

A Young Eagles flight is an important and special moment for many young people, but it is only the first step in the EAA Young Eagles Flight Plan, which aims to get as many pilots in the sky as possible. Sporty’s Learn to Fly Course is a huge part of making that happen.

The concept for the free online courses was developed with input from EAA pilots who had been flying Young Eagles. Those pilots reported that many of the young people wanted to discover more about aviation but lacked access to reliable and professional resources. Sporty’s filled that role by offering its popular online course at no charge. The goal is to build the next generation of aviators and boost student pilot starts with a group already engaged through the Young Eagles program.

“Sporty’s has been a strong supporter of the Young Eagles program for years,” said Brian O’Lena, EAA Manager of Young Eagle and Eagle Flights. “They understand that creating the next generation of aviators is a long-term process and by supplying over 50,000 Sporty’s Learn to Fly Courses to Young Eagles they are helping make the dream of flight a reality.”

This progression from Young Eagles flights to enrollment in Sporty’s Learn to Fly Course perfectly supports EAA’s mission to grow participation in aviation by promoting The Spirit of Aviation, by giving young people more accessible pathways into the air.

Cessna 208B Owners Should Inspect Elevator Up Rigging