Next Step: Committee Approval of Pilot’s Bill of Rights 2 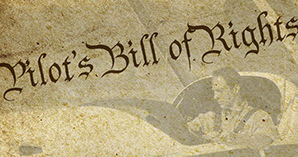 On November 18, 2015, the U.S. Senate Committee on Commerce, Science, and Transportation on Wednesday debated the Pilot’s Bill of Rights 2, which includes the long-awaited and needed aeromedical reform provisions that would lift many of the expensive and onerous burdens now faced by pilots flying recreationally under a third-class medical certificate.

The committee approved and adopted a bipartisan amendment from Sen. Joe Manchin (D-West Virginia) that was supported by 17 aviation organizations, including EAA and AOPA. That amendment contained the important aeromedical reform language. The committee also voted down two amendments that would have weakened the bill.

Schedule conflicts in the Senate prevented a final committee vote that would have moved the legislation to the full Senate. Since debate on the measure had been completed, however, it is hoped that the committee will meet again very soon to complete the procedural process.

“While the scheduling conflicts that prevented a final committee vote today is unfortunate, the bill continues to hold bipartisan support from 69 senators and is ready to move forward after completion of today’s debate,” said Sean Elliott, EAA’s vice president of advocacy and safety. “This is a measure that will save the FAA and the government millions of dollars while lifting cost and hassle factors to the aeromedical certification process. We urge the committee to continue its work on this important legislation as soon as possible.”

“I welcome Sen. Joe Manchin’s amendment to the Pilot’s Bill of Rights 2 that was adopted in the Senate Commerce Committee during markup of my legislation,” Inhofe said after the committee session. “This amendment has my full support as it further improves the third-class medical provision. Currently, FAA’s medical certification process is bureaucratic, burdensome, and discourages pilots from disclosing and treating medical conditions that could impact their ability to fly. With this amendment, the bill provides a new medical certification process for qualified and trained pilots that encourages a robust dialogue between pilots and their personal physician. It requires pilots to complete a medical education course every two years and be treated by their physician for any medical diagnosis that could impact their ability to fly.

“In short, this bill reforms the medical certification process for general aviation pilots in a way that will increase pilots’ knowledge of risk while demanding robust treatment of identified conditions. I want to thank Sen. Thune for holding the markup and Sen. Manchin for his partnership, hard work, and support on this bill. This bill addresses some of the most important issues presently facing pilots and the general aviation community, and with 68 cosponsors, I expect this bill to continue making progress in the Senate.”

AirVenture 2020 Canceled Due to COVID-19 Concerns