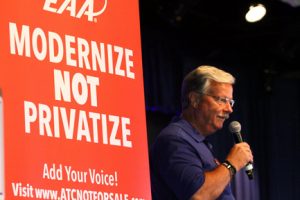 Pelton: GA Will Get “Left Out” in Privatization

October 12, 2017 – General aviation will be the neglected segment in the American aviation community if ATC privatization as proposed in a current House bill becomes law, said EAA CEO and Chairman of the Board Jack J. Pelton at the National Business Aviation Association (NBAA) convention in Las Vegas.

Joining other GA leaders at the convention’s kickoff breakfast, Pelton said a privatized ATC entity would have little incentive to consider GA’s operational concerns and would be controlled by a board dominated by airline and commercial aviation interests.

“Where would general aviation be at the end of the day, with the airlines calling the shots?” Pelton asked. “It could really be catastrophic, as far as I’m concerned, in so many ways. We’ll get left out.”

Some of those possibilities include GA being blocked from access to major airspace areas in times of airline backups – 80 percent of which occur because of weather or airline overscheduling. Such access restrictions have already occurred in countries with privatized airspace.

In addition, three separate nonpartisan government research bureaus have raised considerable doubts about the plan detailed in H.R. 2997. Those concerns include a $100 billion addition to the federal deficit over 10 years, slowing of ATC modernization, and questions surrounding the plan’s constitutionality.

The NBAA convention also served as the premier location for a new video featuring some of the nation’s most well-known aviators, including astronaut Jim Lovell, airline pilot Sully Sullenberger and country music star Dierks Bentley, speaking out against privatization.

“The voices within GA are making a difference on Capitol Hill,” Pelton said. “We must keep sending that message, even if you’ve sent it before: Privatization is a bad solution to a non-existent problem, and the ‘airline-ization’ of our air traffic system will have devastating consequences for GA, airline passengers, and the nation’s airports.”

The GA leaders at NBAA encourage the aviation community to visit www.ATCnotforsale.com for information on the privatization issue and to use that website and the telephone hotline at 833-GA-VOICE to contact their elected representatives in Washington, DC, and encourage these officials to oppose ATC privatization (H.R. 2997).