When I was growing up my father was into all kinds of wings, wheels, and water activities. He was a boat, camper, and canoe dealer. In fact, he was the first Ski-Doo snowmobile dealer in the state. The snowmobile was a great addition to our fun. Back then it seemed like the winters had more snow and lasted longer, so having another fun snow activity was appreciated.

I know the Midwest is not the greatest place to snow ski — there are only a few small hills that a person can ski on — but with the Ski-Doo snowmobiles, we were snow skiing on water skis behind snowmobiles. When that got boring, we progressed to our version of the snowboard. We probably should have patented the idea and made a bundle on the snowboard craze.

We would take an old wooden water ski and cut off about a foot or two of the length. After removing the binders, we would install strips of wood across the ski where the binders were located to keep our feet from sliding forward on the ski. At the upturned front of the ski, we drilled a hole. Knotting one end of a short length of ski rope, we threaded it through the hole and tied a loop at the other end for a handle.

Our house on Hyland Avenue was at the top of a big hill. At the bottom of the hill was a flat area that had a few cars parked at the curb. On the east side of Hyland Avenue, there was a really nice wooded hill heading down to the street from the cemetery. As young snowboarding fools, we used to stand on our modified water skis, grasp the rope like a rodeo star and head down cemetery hill toward Hyland Avenue. Ego and youth would have us dodging trees, carving the snow, and usually face planting just before the parked cars. Smart, no, but at that age fun.

Here we are snowboarding a couple of times a year and we were expert enough to dodge trees, cars, and curbs. We weren’t always in full control. There was the occasional fall that would send the water ski, err, snowboard sailing between the cars and into the street. There was actually an occasion that resulted in a few tire tracks on one of the boards. Guess it was just foolish luck that only the board ended up under the passing car. I like using the word “brave” to describe a few of my escapades although “stupid” might be better.

The concern when kids (and adults) do “brave” things is the liability that they are creating. Back when I was a kid, I don’t think we had as much threat of lawsuits or liability issues if the snowboard hit a car. As kids, we didn’t have much money to worry about losing. The snowboard was made from a water ski that no one wanted. If it broke, we just made another one. But now the cost of a good snowboard or a pair of skis can be upwards of $1,000. The “toys” have gotten more expensive and the money doesn’t “grow on trees” like when I was young. So now boards sailing unmanned across a busy street gives me chills. Okay, another reason might be because I work in the insurance industry.

As an adult, I figure I shouldn’t personally run into these situations quite as often. I should know better — maybe. There have been many times when I thought I knew better but apparently I didn’t. Like the time I flew a Cessna 150 out of a snow-covered hay field on a ferry permit. Or the time I tried to follow the river home and the ceiling got lower and lower until I was below the bluffs without floats. Thank goodness for a reliable engine!

It does happen. Right now, you are probably wondering how my childhood snowboarding exploits fit into aviation. Well, we make pilot decisions that put us in situations not unlike busy streets and homemade snowboards. And in this case, winter snows bring visions of landing on frozen lakes with (or without) skis.

Many a pilot has traded their wheels for skis on the family Cessna 170 or Piper Super Cub to experience the thrill of landing on a frozen, snow-covered lake. Usually, it’s a great experience but occasionally it has ended with bad results. Like the board and tire tracks, flying on skis can have a disastrous effect on an aircraft if the landing area is not long enough or smooth enough.

But if you are interested in experiencing the ski-equipped aircraft world, let’s discuss a few things to consider. First, what kind of skis are you thinking? The FAA breaks it into two categories — plain skis and combination skis. With plain skis you completely replace the wheels with skis. These would typically be the cheapest option. Although they have their own issues like moving the plane around on dry ground.

The combination skis combine the wheels with the skis. They either install around the wheels (letting the wheels stick through for non-snow situations — often called “penetration” skis) or they have retractable wheels. In my opinion, retractable wheel skis mean more money and more weight and are not as practical.

Personally, I think the best ski option would be the combination skis that let the wheels “penetrate” through the skis. But I think it depends on the type of plane you are using.

On a side note, I have seen ultralights use floats to land on snow; I’m not sure that really counts, but it does appear to work.

Another issue when skis replace the wheels is that it eliminates the braking systems. Usually the friction and drag of the skis slows the plane down and eliminates the need for brakes but there is always the risk of ice or a too-short runway. There can also be the occasional damage from a hidden obstruction, snowdrift, dirt, or grooves in the ice that catapults the plane to a bone-jarring stop. Ground loops, nose overs, and gear damage are common claims for aircraft with skis attached.

Many insurance companies do not have any language in their policies that excludes converting your pride and joy to skis. A land plane is a land plane. Unlike floats, adding skis doesn’t change that fact. But there are a few companies that do not like skis. In a quick review I found a policy that states the following: “The insurance afforded by this policy shall not apply during the operation of the aircraft where the purpose or intent of such operation is any of the following, regardless of whether any charge is made: … (g)Taxi, take off or landing on snow or ice, while the aircraft is equipped with skis.”

Also, you need to make sure the policy doesn’t exclude off-airport landings. If it does you can’t land at your friend’s farm field or any non-official private airstrip even if you have access and permission to fly into it (with or without skis). Just to be sure, contact your aviation insurance agent and confirm that off-airport landings and ski use are not prohibited in your policy.

There are a lot of things you should consider before adding skis to your aircraft. Here are several things to think about.

Questions to ask before adding skis:

Thinking out loud here, if you land a ski-equipped aircraft on a supposedly frozen lake and the plane falls through the ice, what happens? It is now on (or rather in) the water. Is a seaplane rating needed along with seaplane insurance coverage? 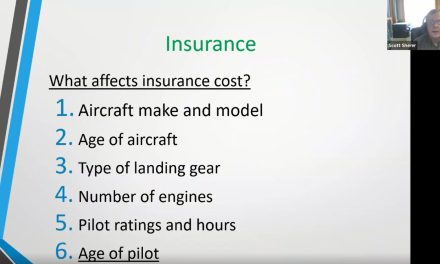 How to Buy a Used Cessna for Sale, Pre-Purchase, Video 3 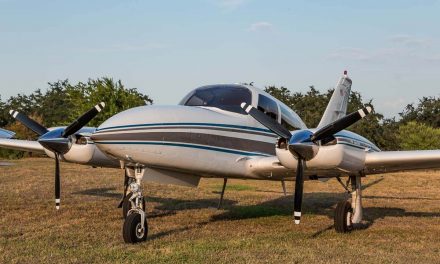 Moving Up the Ladder: Consider this before buying a bigger plane 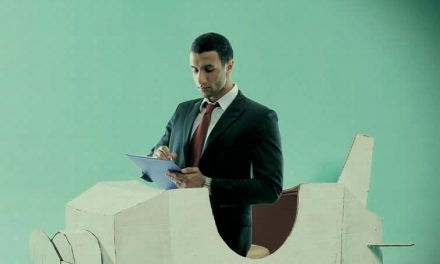 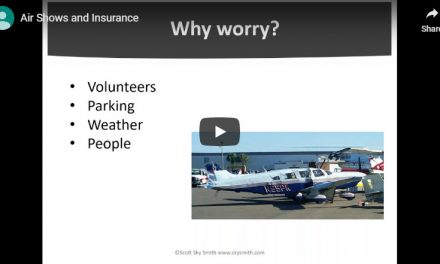 Air Shows and Insurance: The Webinar