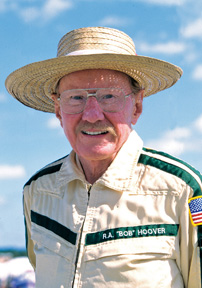 All over the internet there are testimonials, blogs and obituaries for Bob Hoover. Some of these are by other famous aviation personalities like Phil Boyer, Mark Baker, Harrison Ford and many, many others. Here, however, I’d like to share some personal commentary and anecdotes regarding this amazing gentleman from some lesser-known (but equally qualified) perspectives.

Mr. Hoover earned the Distinguished Flying Cross and Purple Heart while in the military as he flew 58 successful combat missions. On his 59th mission, his Spitfire was shot down and he spent 16 months as a German POW before he escaped in a stolen German fighter plane. 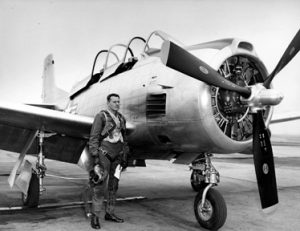 After the war, Hoover became a test pilot for General Motors, North American Aviation and North American Rockwell. He also flew the chase plane for Chuck Yeager in the Bell X-1 that went supersonic, and for decades he appeared in airshows flying his famed P-51, “Old Yeller,” and his green Shrike Commander.

In 1994, the FAA grounded him by revoking his medical, but he and his flying friends did battle with the FAA and won. Hoover’s medical was reinstated and he continued to fly. The Pilots Bill of Rights that we enjoy now is a direct offshoot of this event.

I watched Mr. Hoover’s airshow routine throughout the 1970s at Oshkosh, and in subsequent decades he would hang out by the military airplanes at the north end of Oshkosh. I would often run into him and Chuck Yeager just chatting or eating burgers. Once I heard him cursing because he’d gotten ketchup on the wing of an airplane. He then cleaned it up using his shirt!

Then, about 20 years ago, my son, Matt, and I drove from Wisconsin to Ohio to look at an airplane that was for sale. After a long car ride, my son (then about 8 years old) wanted to go to the hangar before we checked into a motel. However, this was before the days of automobile GPS so it took us a long time to find the airport and hangar. We eventually found the airport and I called the fellow who owned the airplane to meet us at the hangar.

The gentleman arrived a few minutes later and opened the hangar door. Now standing inside the thankfully warm hangar, the airplane owner turned to greet another fellow with a mustache who was already inside with a simple “Hi Bob.” It was none other than Bob Hoover with his Shrike Commander! 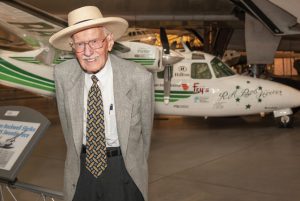 Ultimately, we did not buy the airplane we’d traveled so far to see, but we did spend most of that chilly January evening in a hangar casually chatting with a bonafide aviation legend. It was a great day for both me and my son.

Upon hearing of Bob’s departure, I called up one of my fellow aviators, Frank Kashinski. Frank and Bob were close friends, and if you were to visit Frank’s bar in his basement you’d see dozens of framed photos of Bob Hoover, Chuck Yeager, Sean D. Tucker, Patty Wagstaff and many others hanging on his wall. Most of the photos have Frank in them and feature a personal message to him from the pilot.

As Frank and I talked about Bob’s passing, he shared the following memories and anecdotes:

“Bob had such love for our country and to not see the American flag while in a German prison during the war hurt him deeply. I remember – more than once – being in his presence at the start of an airshow during the playing of National Anthem. If Bob would see someone who was not standing, he would yell, ‘Young man, please stand at attention!’ Once, he actually went over and spoke to a young man about it. Later, that young man’s father came over to Bob and thanked him for talking with his son.

Jimmy Driskell, Bob’s friend and airshow narrator, told me that he was so afraid that Bob would yell at him that he would get up from his couch at home and stand during the Anthem while watching baseball games on TV! Anytime I hear the National Anthem, I am always looking for Bob.”

“During Oshkosh in the late 70s, I was assisting Bob with the Mustang when another Mustang parked next to Bob’s plane and a very young man hopped out. Two older gentlemen who were looking at Bob’s plane commented that this young man was going to kill himself in that plane and that he was not old enough to be flying a Mustang. Bob came over to them and said, ‘Gentleman, I was flying them at his age, and they were shooting at me!’ I later found out that the young man in the Mustang was Steve Hinton.”

“One year during the airshow, I was standing with Bob and Gene Soucy watching Jimmy Franklin flying in the Aerostar as ZAR in his black cape and helmet. Gene said to Bob. ‘Well, some go to work in spacesuits and some go in their business suits.’ Bob laughed and replied, ‘I’ve done both, but I prefer my business suit!’”

I want to personally thank Frank Kashinski for his part in this tribute. I know that sharing these memories was deeply personal to him. For the rest of us, Bob’s passing may not be nearly as personal, but it hurts nonetheless.