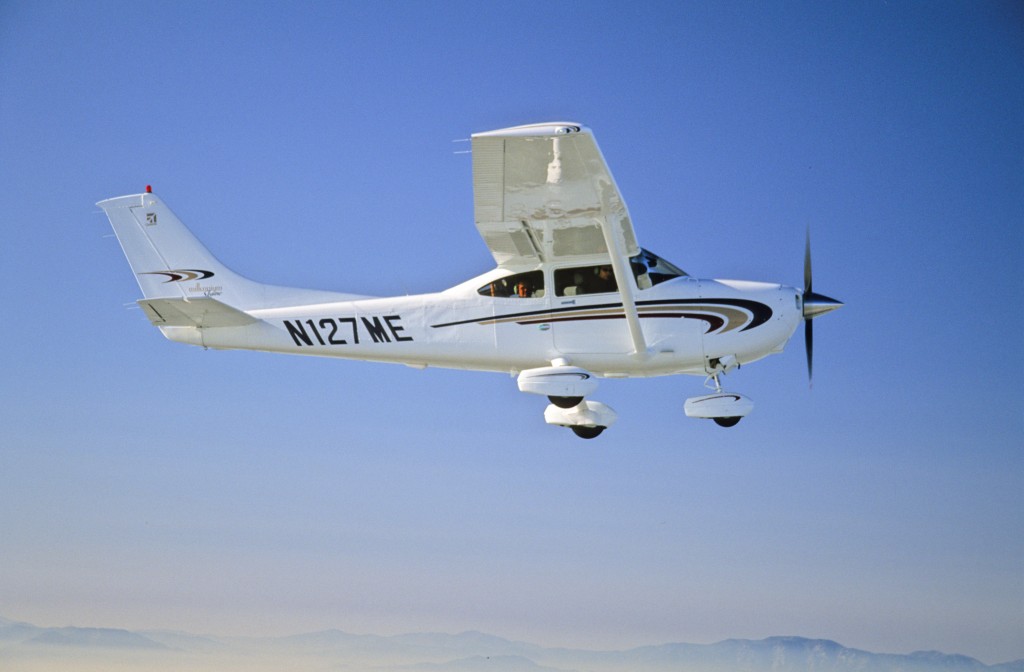 Like many of you, I’ve logged my share of hours in C-182s of one description or another, fixed-gear and retractable, normally-aspirated and turbocharged. By any measure, Skylanes are almost universally regarded as wonderful machines, blessed with docile handling, reasonable performance, good reliability, and (in some cases) full fuel, four-place capability.

These days, creature comforts are generally excellent, regardless of the size of your creatures, the avionics suite is nothing short of amazing, and the airplane continues to carry a phenomenal payload. Still, position an old and a new Skylane side-by-side in bare aluminum trim, and you might be hard-pressed to tell the difference. Despite the basic model’s age, the Skylane and Turbo Skylane continue to represent the state-of-the-art from the Independence, Kansas, manufacturer.

Rumors have been flying for years about the Cessna Next Generation Piston airplane, and indeed, many of us saw the airplane at an AOPA Convention in Palm Springs a few years ago. Cessna is unlikely to pursue that design until the market turns around, however. For the nonce, the Skylane is Cessna’s top, four-seat single.

Just as the Piper Cub was regarded the generic airplane of the ‘30s and ‘40s, and the butterfly-tail Beech Bonanza dominated the ‘50s and ‘60s, the Skylane has come to be regarded as the definitive general aviation design of the ‘70s and ‘80s. Discontinued with all other Cessna piston singles in 1986, the revived Skylane has evolved into a handsome package that continues to endear itself and give the competition a run for the money, specifically BECAUSE the basic design remains true to the original.

If the basic airplane’s comparative lack of innovation and aerodynamic improvement seem almost anachronistic in this age of composite construction, NLF airfoils, ballistic parachutes, and innovative fuselage design, that’s not necessarily such a bad thing—assuming you got it right the first time. Cessna did. Like the DC-3 and Boeing Stearman in other general aviation markets, the venerable Skylane is far from perfect, but almost a half century after its introduction, it continues to offer perhaps the best combination of simplicity, performance, comfort, economy, and payload in the industry.

If you accept the premise that the Skylane is one of the world’s definitive singles, the Turbo Skylane represents perhaps the best of the best. In Western skies where runways often perch a mile or more above the sea, the trend is definitely toward turbos. Combine a 90 degree F day with the field elevation of Albuquerque or Denver, and many normally-aspirated airplanes simply need not apply.

Cessna uses essentially the same 540 cubic inch Lycoming engine in both the normally-aspirated and turbocharged Skylanes, but the sloped controller in the heavy-breathing Lycoming TIO-540-AK1A Turbo Skylane maintains full-rated power (235 hp) all the way to the airplane’s maximum operating altitude of 20,000 feet. High density altitudes are less of a challenge with such power on tap.

The Cessna store in my neck of the woods is Pacific Air Center, one of the world’s largest piston Cessna dealers. Sales manager Rich Manor put me in touch with Mike Bastien, owner of a late-model Turbo-Skylane. Bastien also owns Universal Flooring Systems, a commercial flooring company with contracts up and down the West Coast and as far east as Phoenix. Bastien purchased his Skylane specifically to service his company’s interests. “It’s truly a marvelous airplane,” says Bastien. “For me, the Skylane was the perfect follow-on to my Skyhawk XP.”

Bastien was first licensed in 1977, and the flooring executive wanted a stable IFR platform to service his projects in San Francisco, San Diego, and other locations out West. “I use the airplane probably 90 percent for business, 10 percent for family transport, and it’s ideal for operation in the mountains. Once you’re trained in the use of the G1000 in the Skylane, the combination of gentle handling and simple, straightforward avionics makes IFR flying almost intuitive,” Bastien explains.

Today’s basic Skylane includes a list of accoutrements the old Skylane could only dream of. Perhaps the most innovative safety improvement is the AmSafe Aviation Inflatable Restraint (inevitably A-I-R), a system of seatbelt-mounted airbags designed to inflate within milliseconds of detecting a 16 G impact. Automotive-style airbags were out of the question because of weight, airframe, and certification considerations, so Cessna contracted with AmSafe to create a simpler, but similarly effective, method of restraint.

The new generation of Skylanes also features the Garmin G1000 glass cockpit. It’s hard to imagine a communication and navigation system with more talent. We’ve expounded on the virtues of the G1000 many times before, so we won’t belabor the point here, but the G1000 brings essentially all the tricks of airline cockpits to the ranks of general aviation.

Aircraft speeds can translate to impact G-loads that far outstrip anything you might experience in an automobile, so you probably shouldn’t expect to walk away after driving head-on into a mountain at cruise, but the AmSafe system will improve survivability in most “more reasonable” impacts. Yes, the thick belts are a little clumsier to use, with bulky, decompressed airbags tightly packed across your waist, but it’s comforting to know you have some protection in the event of a minor impact.

Other nice touches inside the Turbo Skylane include a 14-volt power outlet, Rosen visors, a classy, floor-mounted chart and cup-holder console between the front buckets, and a dramatically improved air circulation system that doesn’t shortchange the folks in back.

Any pilot who has flown a 182 knows it’s essentially a 172 with a hormone problem, and for that very reason, the secret to the Skylane’s personality is trim. At its full gross weight of 3100 pounds, the Skylane is 550 pounds heavier than the old Skyhawk SP, and the additional weight manifests itself primarily in pitch. The airplane’s elevator is notably heavier than that of the ‘Hawk, demanding immediate re-trimming for any sudden attitude change, such as a go-around.

The roll rate isn’t dramatic, but you wouldn’t expect it to be considering the airplane’s mission. As with most, current-generation Cessnas, adverse yaw is virtually non-existent, making rudder coordination unnecessary in banks shallower than 35 degrees.

The key to the T182’s personality is the turbo itself. An obvious primary benefit of turbocharging is that – most of the time – the effects of temperature and field elevation aren’t such limiting factors during takeoff and initial climb. The Turbo Skylane will turn in a 1000-fpm ascent or more at practically all heights to 10,000 feet, then 750-800 fpm on up to the airplane’s maximum operating height of 20,000 feet.

A turbo also expedites high altitude cruise for those pilots who don’t mind sucking on supplemental oxygen. A built-in, four-position oxygen system is standard on the T-Skylane, and the new generation of cannulas makes oxygen use more tolerable than the old, full facemasks. The gas still dries out your throat and sinuses, but it does facilitate travel four miles above the Earth for those pilots who are so inclined.

There are even some O2 systems available that attach an oxygen dispenser to a headset microphone stalk, blowing oxygen directly into the pilot’s nostrils and making the process of oxygen delivery almost totally transparent. If you fly regularly with a skittish non-pilot, these can be a valuable option.

A turbo offers the benefit of better speed at all heights above about 9000 feet, but higher altitude also provides better VHF radio range, reduced traffic congestion, less turbulence, and better weather. Use of oxygen does increase operating cost somewhat, (roughly $4/passenger/hour), but for many pilots, the benefits outweigh the costs.

Fortunately, the definition of high altitude doesn’t have to involve the flight levels. The Turbo Skylane can realize significant performance benefits at non-oxygen altitudes. The Lycoming is so severely de-rated, that max cruise power is listed as 88 percent. If you’re flying at 12,000 feet with power at the limit, you can expect 158-160 knots, depending upon weight. That’s easily equal to or better than the best efforts of some retractables, like the old Commander 114, SOCATA Trinidad, and the Piper Turbo Arrow.

For those who don’t mind the inconvenience and are willing to strap on a mask and climb to 18,000 feet or higher, the Turbo Skylane will turn an extra 15 knots of cruise, and it will scoot across country at 175 knots. With 87 gallons in the tanks and a typical burn of 17 gph at high cruise, plan on 600 nm plus reserve between fuel stops. For those pilots with long-range bladders who can endure eight-hour legs, dramatically reduced power settings can extend range to nearly 1000 nm.

The turbocharging and associated plumbing does inflict a 100-pound penalty on payload, and the result is the airplane will no longer lift four folks and full fuel. It’s more of a three-place machine with both tanks topped. If you fly with half fuel, however, you’ll have allowance for the fourth soul plus a little baggage, and you can still endure for two hours plus IFR reserves.

It wasn’t so many years ago that pilots were scared of turbos, and with good reason. TBOs were lower, turbocharged engines ran hotter, fuel burn was high, maintenance cost more, and pilots were justifiably concerned about reliability.

The airplane also returns to Earth with similar reliability, demanding minimum piloting skill. Stalls are gentle and forgiving, and easily recoverable. That contributes to excellent manners in the pattern. Takeoff and landing runway requirements are minimal, if not exactly in the STOL class. The Skylane’s leaf-sprung steel main gear allows it to land in places where other airplanes would fear to roll a tread. Just remember to remove the wheel pants if you fly off-airport. The Turbo Skylane’s bulbous, composite wheel fairings won’t tolerate truly rough strips.

To some extent, at least, the Skylane’s turbo defines the airplane. If you fly out west where the Earth demands airplanes to match its mountains, a Turbo Skylane may offer exactly the right combination of ingredients. Combine excellent reliability, plentiful performance, and reasonable comfort, and you have the formula that has made the 182 a winner for nearly a half-century.

Just when Cessna thought it was safe to discontinue the normally-aspirated and turbocharged avgas 182s in favor of the new Skylane JT-A, fate stepped in with a surprise. As the new JT-A was nearing certification, one of the test airplanes suffered a complete power failure and had to be landed off-airport. The test pilot did a good job and walked away, but the certification effort was set back quite a bit. This left Cessna in the unenviable position of having no Skylanes to sell, since the avgas models had been phased out. Stay tuned for the next chapter of the Skylane saga.

All specs and performance numbers are drawn from official sources, often the aircraft flight manual or the manufacturer’s website. An alternate source on used airplanes is Jane’s All-The-World’s Aircraft. 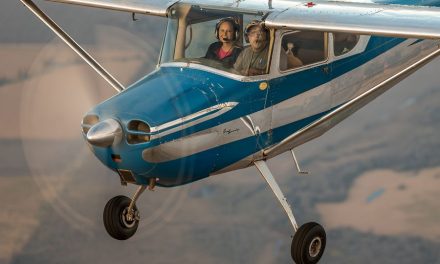