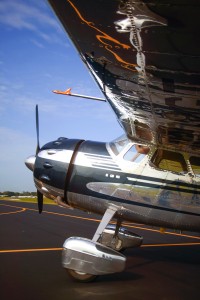 Cessna’s post-war, art deco Businessliner was one of the most comfortable and defining general aviation airplanes following World War II.

There’s no precise way to define taste, but it is possible to define class. Ok, perhaps class can also be difficult to characterize, but most of us feel it’s easy to recognize. To paraphrase a totally unknown critic/congressman/pundit, “I may not be able to define class, but I know it when I see it.”

Most of us agree. When you see a Mercedes S550 or Bentley, you recognize class even before you see the nameplate. Among pilots, it’s the same with the Cessna 195.

Born in the post-WWII rush to accommodate a market that never materialized, the Cessna 190 and 195 (essentially the same airplane with different engines) were designed to one-up the Beech Bonanza. The goal wasn’t to outrun the jaunty V-tail, but to provide ultimate, Packard-style interior comfort to a class of pilots who believed the race wasn’t always to the swift.

While there’s no evidence that Cessna designer Dwayne Wallace configured the 195 Businessliner around a Packard interior (as the Klapmeier brothers built their Cirrus around the BMW 5 series sedans), the new airplane’s mission was considerably more refined than the Bonanza’s, more concerned with how comfortably you arrived than how quickly you did so.

The 195 was essentially an Airmaster with a hormone injection. The notably-smaller, ‘30s-era C37 Airmaster flew with only 165 hp to protect itself. It carried four people (it says here) in modestly cramped comfort at speeds of 105-110 knots max.

The Cessna 195 was the same airplane except scaled-up in every dimension, a good thing because Cessna introduced the bigger model in 1947 at a base price of $12,759, about $3000 MORE than a Bonanza. The C195’s 300-hp Jacobs engine contributed at least $1000 to that higher price. That was considerable money in those days, but it bought a semi-cabin class airplane that was closer to a Spartan Executive than anything else.

In exchange for such a stipend, Cessna delivered a product that was definitely a cut above the late ‘40s competition. With that huge, 775 cubic inch, seven-cylinder Jacobs out on the nose, the 195 translated most of the engine’s 48-inch width to the cabin.

Even today, 195s always attract a crowd on any ramp. Pilot and passengers enter thru a left-side, aft door, then walk forward to the front office. Seating is for five in a 2 + 3 configuration. Pilot and copilot climb forward to front seats perched behind a giant panel and a windshield that drapes well back over the cockpit.

The 195 sports a multitude of features not found on most other airplanes of the time. Outside the 195, the big 218 square foot wing is full cantilever with no struts or braces to add drag. The Jacobs engine is hinged at the side, and it swings open to provide convenient service access to mags, distributor, starter and generator, as well as the engine itself. The Jacobs is so tightly cowled that the rocker arms hide under small bumps around the cowling.

The gear is the late Steve Whitman’s patented design, constructed of chrome-vanadium steel for additional strength. Landing lights are retractable and electrically activated, arcing down out of the wings, a system later adapted to the Cessna 421 Golden Eagle.

Inside the 195, there’s a roll-down storm window fitted with plate glass, rather than Plexiglas, on the pilot’s side. Front seats adjust fore and aft and through a surprising 15 inches of travel to accommodate even the longest legs. A quartet of windows extends along each side of the airplane to provide plenty of light despite the high wing. The parking brake has the added benefit of locking the controls as well as the main wheels. The main cabin door also does double duty; it’s directly connected to the boarding step and automatically retracts it when the door is closed.

The 195 is more of a Bentley than a Jaguar XKE, and that was exactly what Rick Farrow of Godfrey, Illinois, was looking for. Farrow, a Snap-On Tools sales manager, had worked his way through a half-dozen airplanes, culminating in a Beech E55 Baron. About a dozen years ago, however, he amazed his friends by trading the Baron for a 195

“Everyone was stunned,” smiles Farrow. “The E55 is almost universally regarded as a 200-knot hot rod, and no one expected me to trade for a classic Cessna 195.” In fact, Farrow’s airplane started life as a 190 with a Continental radial but was later upgraded with the Jacobs to make it a 195.

Farrow, however, has never regretted the transition from hot twin to classic single. “The 195 certainly isn’t one-of-a-kind, but it’s one of a few,” Farrow explains. “There were just over 1000 of the type built, and probably half of those are still flying, some of them overseas, so they no longer appear on the U.S. registry. No matter where I go (except to air shows such as Sun ‘n Fun or Oshkosh), I almost never see any other 195s on the ramp. It’s a very unusual airplane.”

Farrow flies his big Cessna single regularly all over the Midwest. Just as with his Baron, he uses his 195 in pursuit of business for Snap-On Tools. “The company has a tool box plant in Algona, Iowa, 50 miles from Mason City, and there’s no convenient airline service. With the 195, I fly out of my local airport near St. Louis and into the small, general aviation Algona airport, do business, and I’m always home for dinner.”

Farrow also makes the occasional weekend hamburger flight and regular vacation trips to the Bahamas in his classic Cessna. He’s an enthusiastic air show fan, and that’s where we caught up with him, at the annual AirVenture show in Oshkosh.

It should go without saying, but we jumped at the chance to fly Farrow’s near-perfect 195. Engine start is a little different from firing up a standard Continental or Lycoming. After all the usual preliminaries, you engage the starter and then flip the mag switch to “Batt” after six blades have rotated past. In typical radial style, the cylinders cough and sputter, voting on whether conditions are right to run today, then gradually come online until the “Shaky Jake” has all seven firing.

In fact, the Jacobs’ derogatory nickname seems inappropriate for the R755. This engine is generally remarkably smooth, turning only 2200 rpm at redline. “Leaky Jake” might be a more descriptive moniker. It seems all radials leak oil, so much so that the Jacobs features a huge, five-gallon, dry sump oil tank mounted just behind the instrument panel. {One peripheral benefit of this arrangement is that in frigid weather, you have five gallons of warm oil circulating through the front of the cabin to help reduce the chill.}

Just as with turbines, insufficient battery power can result in the piston equivalent of a hot start. If the engine backfires during start, not uncommon with Jacobs radials, you can wind up with an induction fire. Standard procedure is to continue cranking to suck the flames back into the engine. If your battery is low on volts, however, and you can’t continue to turn the prop, you could be in trouble.

Taxiing to the runway is a little different in a 195 because the airplane is effectively blind on the right. Scrunch your head against the left sidewall and you have a semblance of visibility straight ahead, but S-turns are still mandatory because of the high deck angle. The panel is so wide that you’d have to make radical S-turns to see anything forward on the right.

You have the same problem on takeoff, but the tail comes up quickly so you can usually see what you’re about to hit. The big wing levitates like an elevator rather than pitching up precipitously, and the airplane clears the ground at 1000 fpm at Vy. Again, though, forward visibility is severely limited at such a pitch attitude, and most pilots, Farrow included, prefer to ascend at a cruise climb of at least 100 knots, usually worth 750 fpm.

Farrow suggests a typical block cruise is 135 knots, and if that’s at least 60 knots slower than his old Baron, he doesn’t mind a bit, considering how much cheaper the Cessna is to operate. “I can fly for as long as four hours if I need to,” says the owner. “That’s nearly 550 nm, and I enjoy flying the airplane so much, I hardly notice.”

Perhaps the Cessna 195’s strongest suit is comfort and stability. It plows through turbulence with minimum fuss. “My wife, Jeanie, is a pretty informed passenger, having ridden in several of my other airplanes,” says Farrow. “She offers a passenger’s perspective I might not share, because I’m so wrapped up in considerations of performance, handling and flying characteristics. She often flew with me in the E55 and other machines, and she feels this airplane offers the best comfort and smooth ride of anything she’s been in.”

Descents in any radial present a challenge in that it’s important to maintain a reasonable oil temperature. The 195 is especially susceptible – the big wing resists descents, potentially seducing unwary pilots into major power reductions. Chop and drop descents, however, are out of the question in a 195. You need to plan well ahead to make certain you don’t induce shock cooling and reduce oil temperatures to dangerous levels. Precise Flight Speed Brakes would be a welcome addition for coming downhill, but sadly, they’re not approved on the 195. The only alternative is careful planning and some flaps.

With a dirty stall speed down around 55 knots, approaches work best at 70 knots or more. The small, short chord flaps are relatively ineffective except for lowering the nose during approach. Landings aren’t nearly the challenge you might expect, but you do need to stay off your toes during flare and touchdown. The trick is to keep away from the toe brakes unless you’re about to lose it completely. Cessna 195s aren’t that tough to return to Earth unless there’s a bad crosswind or you’re doing something dumb. I’ve certainly done my share of dumb things in tailwheels of all descriptions, but (knock on aluminum) I haven’t lost one (yet).

Cessna’s last round-engine airplane serves all over the world and you’ll often see the type in Alaska and Canada, operating on skis as well as oversized tires. No one will mistake it for a STOL machine, and it’s most emphatically not a bush bird, but it hauls a good load and can land in places that some other airplanes can’t.

As for Rick Farrow, he’s convinced he’s found the perfect airplane. “I love the 195. About the only thing I’d rather have would be a later model, perhaps one of the last 1954 airplanes.

“There’s probably no such thing as an end-all, do-all airplane,” Farrow explains, “and despite all its talents, the 195 wouldn’t qualify as superior in every application. For me, though, it offers a little nostalgia, reasonable performance and great comfort and, perhaps best of all, it exemplifies that indefinable quality known as class.”