The 310: Cessna’s Six-Seat “Learjet with Props” 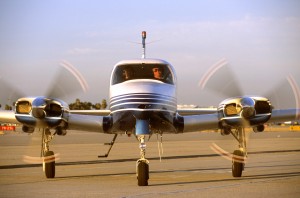 Yes, your honor, I admit it. I was once and still remain a speed freak—the more the better!

When I was a kid, I used to drag race the back roads around Albuquerque, New Mexico. Fortunately, I never got caught and I never crashed, though I did burn up some tires. Later, I switched to sports cars, a more legal pursuit, campaigning an Austin Healey 3000 MkII on the SCCA gymkhana circuit, again chewing through clutches, tires, and money with little to show for it other than memories.

Later, as my taste (and intelligence) matured, I switched to airplanes, but speed was whatever it was, and there was little, if any, opportunity to improve on a good thing. I discovered that the FAA, in their ultimate wisdom, controlled what little you could do to airplanes for more performance. You could spend massive amounts of money and not go much faster.

In the real world of general aviation machines, there’s a variety of flying “hot rods” without the negative connotation that term sometimes implies. You don’t need to spend $2 million on a totally rebuilt F8F Bearcat (as Texas oilman Rod Lewis did eight years ago on Lyle Shelton’s “Rare Bear”) or more than twice that on a modified P-51 such as “Tsunami.” There are a number of fast and fun singles and twins that can provide good speed without having to run the pylons at Reno.

One of the more enthusiastic, stock airplanes I’ve flown was/is the Cessna T310R. Yes, there are several twins that will outrun it, but the 310R’s combination of light weight, plentiful horsepower, and Sky King looks made it a sure fire candidate to blow your hat in the creek. In fact, though the first actual “Songbird” used on the 1951 Sky King TV series was a Cessna T-50 Bobcat, the second and final airplane was a Cessna 310B.

How could anyone NOT be seduced by the Cessna 310? At first sight, the Cessna 310 steals the heart more than the mind. That’s all the more reason to decide up front if you really NEED a twin. For most people who don’t own a refinery or have seven figure bank accounts, the realistic answer is no. Twins can be seductive machines with performance numbers and sex appeal that make them seem unbelievably attractive. The type possesses a magnetic charisma that often transcends their talents. Eighty-seven years ago, after Lindbergh’s successful, 1927, Atlantic crossing, he was asked why he didn’t choose a twin for the trip; his response was, “Why would I want to double my chances of an engine failure?”

It’s certainly true that twins have their place. If you fly regular missions across mountains or over water where an engine failure would make a successful emergency landing unlikely, two engines may be better than one. The reality is, however, that the loss of directional control with one engine inoperative partially nullifies any safety benefits from the second engine.

Sadly, most pilots of multi-engine aircraft rarely practice single-engine flight. Safety statistics for twin engine airplanes don’t support the contention that the second engine contributes to greater safety when one engine quits. The standard joke line among some instructors is, “What do you do when one engine quits on a twin? Start the other one.”

Back in 1955, the Cessna 310 premiered with 50-gallon tip tanks (inevitably branded “tuna tanks” after their fish-like shape) feeding a pair of 240-hp Continentals. Those first 310s could enclose a pilot and four passengers. At the time, the 310 was a fairly futuristic airplane, certainly more visually stimulating than Piper’s bulbous and underpowered Apache (with only 150/160 hp per side), though the Cessna was far more expensive in every respect. Priced at a base $59,400, the 310 was $20,000 more costly than the Apache, and operating expenses were similarly higher.

In fairness, the Cessna twin was never aimed at the training market. Even if you could somehow justify the initial purchase price, operating expenses were considerably more than doubled. (Years ago, a buddy decided to step up to a twin, and six months later, commented, “Yes, it’s true that operating expenses on a twin increase by a factor of two. They’re squared.”)

Negativism aside, twins have an attraction that can’t be denied. There’s just something about climbing into the left seat facing a brace of throttles, props, and mixture controls that provides pilots with the illusion of command, the aura of a four-striper. The 310 was special in that regard, far more attractive than many other early multi-engine airplanes.

Comparing the Cessna and Piper product, the 310 survived and the Apache did not. That’s not because the Apache was a bad design. On the contrary, Piper’s twin trainer was a major success, so much so that when I earned my multi-engine rating in the late ‘60s, there was hardly any choice except the gentle and forgiving Apache. The faster and more agile Twin Comanche assumed the trainer role in 1963, though Piper continued to build the upscale Apache 235 until 1965. Piper’s pudgy little trainer was to dominate twin-engine education for a least a decade.

In contrast, the 310 managed 26 years of production, primarily because it was designed from the outset for a different type of market—the owner flown and corporate transport operator. Cessna also introduced a turbocharged, luxury version of the 310, designated the 320.

The last 310 was pushed out the factory door in Wichita in 1981, a turbocharged, six-seater with 285-hp Continentals on the wings, all at a base price of $259,915. According to the Summer 2014 edition of Aircraft Bluebook Price Digest, a typical used price for that airplane today is $135,000.

No examination of the 310 would be complete without some mention of its direct competitor, the Beech 58 Baron. The six-seat Baron came along in 1970, a stretched version of the company’s earlier 55 Baron. The model 58 was granted a 10-inch-longer fuselage and a full-size aft cargo/passenger door abeam the boarding step. The first Baron 58s used roughly the same engines as the 310 and turned in comparable climb and cruise, but some prospective buyers were put off by the narrow, 43-inch cabin, borrowed directly from the 36 Bonanza.

The 310’s cockpit measured a spacious four feet wide, and though the Cessna twin didn’t have a full-size aft boarding door, many folks in the financial class to afford either airplane were grateful for the extra horizontal dimension to fit their own cross-sectional dimension. Beech was to introduce a turbocharged version of the stretched Baron and even a pressurized model, and the basic normally-aspirated 58 Baron is still in production today. In 1981, last year of Cessna 310 sale, the standard-breathing Baron 58 had an average-equipped tab of $301,920.

A friend, Mike Busch, co-founder of the online aviation newsletter, AvWeb, owns one of the nicest T-310s you could ever imagine. I flew his airplane 25 years ago in conjunction with the ABC-TV series, “Wide World of Flying,” and it was a predictable delight. Mike is an A & P mechanic as well as a 7000-hour pilot, so he’s intimately familiar with all aspects of operating and maintaining a Cessna 310.

Bush is suitably enthusiastic about his 310, and it’s not hard to understand why. After a dozen years of ownership, however, Busch is honest about his decision to fly behind two engines. “My 310R has been a wonderful aircraft,” Busch explains. “It has been very reliable, a great traveling machine, and has treated me very well indeed. It also has appreciated nicely since I bought it. But I’ve learned a lot about twin ownership since then, and it hasn’t all turned out exactly as I anticipated. Frankly, if I were shopping for an aircraft today, I’m not sure it would be a twin.”

The Cessna 310R grosses only 5500 pounds, and has a power loading of just under 10 pounds per horsepower, a virtual guarantee of excellent climb. Cessna’s official climb spec is 1660 fpm, but if you’re flying light, you can often beat that number by several hundred fpm.

The turbocharged version does even better, especially on nonstandard days with warm temperatures. By 1981, turbos had taken on legitimacy and reliability unknown on the earlier models, and some two-thirds of the final year’s production of 310s mounted blowers under the bonnets.

Maximum fuel capacity on the 310 is 203 gallons, and pilots willing to climb high and throttle back to long range cruise can see 1400 nm between pit stops. This makes one stop, transcontinental flights possible between any two points in the contiguous U.S. For those folks who prefer not to fly slowly in fast airplanes, range is closer to 1000 nm at 75 percent.

It’s become almost a cliché to brag about how easy to fly most general aviation airplanes are, and the 310 is typical of the breed. The original premise of storing fuel far out on the wingtips was a bow to crash-worthiness. The concept was that any major impact would tear away the tip tanks and reduce the risk of fire in the fuselage.

Another accidental consequence, however, was a tendency to Dutch roll with any abrupt aileron input. Having 300 pounds of fuel stored at the end of such a long moment arm imparted inertia to the wings if you initiated a quick roll input. It wasn’t a major control problem – just a minor glitch to be aware of.

Landings were stereotypical twin. Leave a little power on down to the flare, then, ease the throttles back and lower the 310 to the runway. Crosswind manners were similarly benign in either the crab or wing down solution.

Technically, Cessna’s 310 was replaced by the Crusader with a big cabin and an airstair door. It barely mattered, however, as Cessna CEO Russ Meyer shut down all piston production in 1986 and resumed with only three models, all singles, in the late 1990s.

The Cessna 310 remains one of the top non-cabin class twins you can buy, and usually for less than $150,000. Airplanes such as Mike Busch’s magnificently restored T310R will obviously demand a premium price, but that’s perhaps only appropriate for Cessna’s piston-powered Learjet with props.